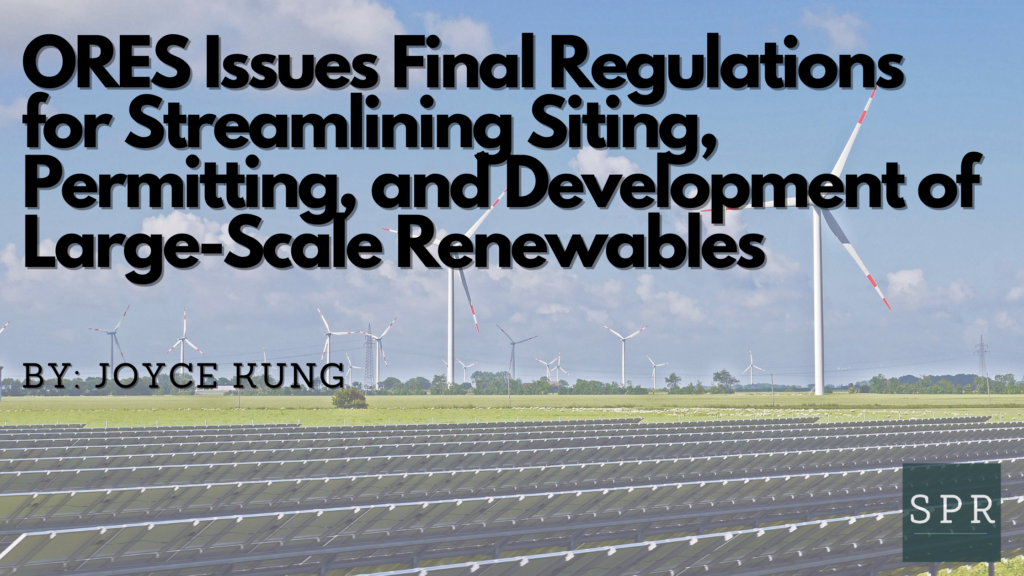 On March 3, 2021, New York State’s newly formed Office of Renewable Energy Siting (“ORES”) issued final regulations for streamlining the siting, permitting, and development of large-scale renewable energy projects in the State.  The regulations were promulgated pursuant to the Accelerated Renewable Energy Growth and Community Benefit Act and reflect the goals of the Climate Leadership and Community Protection Act, requiring that 70% of the State’s electricity will be generated by renewable sources by 2030.

In a previous post, we detailed the carefully-considered procedures and benchmarks set forth in the draft regulations, issued on September 16, 2020. During the comment period, ORES received close to 5,000 comment letters as well as testimony from over 200 individuals at seven public hearings. After consideration and assessment of each of these comments, ORES made certain clarifications and corrections to the proposed regulations. Some of the more notable clarifications are summarized below:

In response to comments and consistent with other sections of the proposed regulations, the final regulations clarify that, during pre-application consultation, applicants should include summaries of substantive provisions of local laws applicable to decommissioning, and not only to construction, operation, and maintenance. Other changes broaden the window for providing notice for community meetings and add certain other agencies for receipt of an applicant’s notice of intent to file an application.

The final regulations also clarify that ORES will determine the boundaries of state-regulated wetlands and surface waters, and clarify the scope of the required delineations and impact assessments.

Minor changes were made related to noise and vibration design goals, clarifying the prohibition on prominent tones to be consistent with an existing application of a 5 dBA penalty, and including energy storage facilities as potential noise sources. In addition, for purposes of an applicant’s visual impacts analysis, the requirement to address the nature and degree of visual change resulting from the operation of a facility was clarified to include the operation of any above-ground interconnections.

The final regulations further clarify that, in connection with geological studies at the site, results of borings or test pits and representative mapped soil and bedrock formations should be provided. ORES will now require permittees for wind facilities to provide a final geotechnical engineering report that includes results of boring and/or test pits at each turbine location.

In addition, bird and bat migration routes should also be considered in identifying species likely to occur at the site.

The final regulations make clear that if an active nest of a NYS-threatened or endangered grassland bird species is discovered prior to or during construction on a facility site that had previously been determined to have de minimis impacts to the species, the applicant will need to engage in further consultation with ORES.  For facilities requiring a  Net Conservation Benefit Plan, to the extent a permittee proposes a grassland bird habitat conservation in lieu of payment of a mitigation fee, the final regulations provide an explanation of the basis for the stated mitigation requirements.

In addition to requiring 14-days’ advance notice to ORES, the final regulations make clear that transfer applicants will need to submit the ORES fee for reviewing and processing an application.

The final regulations provide for termination of a permit to Section 900-11.4, which previously dealt only with permit modifications.

The final regulations (Chapter XVIII, Title 19 of NYCRR Part 900 (Subparts 900-1 to 900-15)) create a clear regulatory pathway for developers and local communities to bring the State’s renewable energy and climate goals to fruition.

In addition to the promulgation of these landmark regulations, the Accelerated Renewable Energy Growth and Community Benefit Act advanced the development of the New York State Energy Research and Development Authority’s (NYSERDA) Clean Energy Resources Development and Incentives “Build-Ready” Program, which is intended to identify sites that can be made build-ready for private renewable energy developers, while also providing economic or societal benefits to host communities and property owners. The first four sites have been selected and have undergone initial assessment and analysis of technical development potential. SPR is proud to be supporting NYSERDA on Build-Ready Program design, strategy, and opportunities.

For questions about the regulations or NYSERDA’s Build-Ready Program, contact Jennifer Coghlan or Dan Chorost.