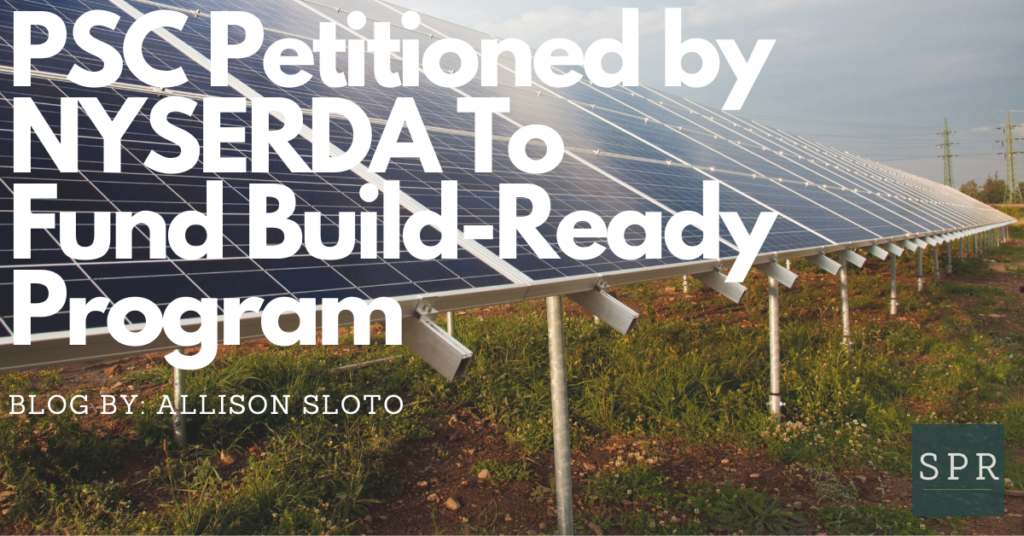 On June 5, 2020, the New York State Energy Research and Development Authority (NYSERDA) petitioned the New York Public Service Commission (PSC) for approval and funding of NYSERDA’s proposed Build-Ready Program, a program that would advance large-scale renewable energy projects by identifying sites that are consistent with New York’s standards and are made build-ready for private renewable energy developers. The Accelerated Renewable Energy Growth and Community Benefit Act (AREGCBA) requires that NYSERDA describe the activities it has taken, and plans to undertake, to advance the Build-Ready program, and request funding for those activities for at least a 5-year period. AREGCBA then requires the PSC to issue an Order within four months from the submission of the Petition. These initiatives are in furtherance of the goals of the NYS Climate Leadership and Community Protection Act (CLCPA).

In its Petition, NYSERDA makes the “business case” for the Build-Ready program, asserting that State government can support and enhance the existing work of the private clean energy market. The State would be able to take a holistic view of State and local needs, determine which communities can benefit from placement of projects, and pilot and further streamline the new permitting processes underway through the Office of Renewable Energy Siting. With this perspective, Build-Ready program projects could be fast-tracked through the development cycle. To achieve CLCPA goals, statewide annual Tier 1 Renewable Energy Certificate (REC) procurement (produced by generators using renewable energy sources) likely would need to increase over procurement levels achieved over the past 3 years, during which NYSERDA has averaged about 3,200 GWh/year (almost twice the amount of capacity supported through over 10 years of the predecessor program, the Renewable Portfolio Standard).

According to the Petition, NYSERDA anticipates that the Build-Ready program would sustain the competitive disposition of approximately 6 large scale renewable projects annually, starting in 2022 or 2023, which collectively are expected to contribute a measurable percentage of the generation associated with future Tier 1 procurements. These utility-scale solar and wind projects may be paired with energy storage with a variety of capacities; the goal is to advance a diversified portfolio capable of beginning to transact within approximately 2 years. Previously developed sites (e.g. brownfields) would be given priority, but greenfield sites would also be considered where there are co-benefits for the local community.

In its Petition, NYSERDA sets forth its proposed Build-Ready program process. First, the Build-Ready team would advance the full life cycle of a project from initial site identification through permitting, interconnection, and sale. After engaging in early-stage screening, a project would then progress through more detailed assessment, analysis, and design stages. The Build-Ready team would execute an interconnection agreement, complete local, state, and federal tax permitting, complete tax arrangements, and any other remaining items needed for engineering, procurement, and construction of the project, including pursuing permits through the new Office of Renewable Energy Siting (for large-scale projects) and through local authorities for smaller projects. NYSERDA’s Petition notes that some projects may be pursued to full “build-ready” status and others may be pursued only to some lower-level “de-risking,” depending on the circumstances.

Then, NYSERDA would issue a Request for Proposals (RFP) for each site. NYSERDA would assign all contracts, leases, PILOTs, host community agreements, etc. over to the purchaser, and the purchaser would be required to pay NYSERDA for the development rights to the project. Any proceeds would be internally recycled to support the advancement of additional sites through the process. NYSERDA has noted that that some earlier-stage projects may be offered in annual auctions to maximize the risk/return ratio, reduce budget, and increase benefits to NYS. Build-Ready RFPs would use the same criteria as Tier 1 solicitations. Build-Ready projects would ultimately generate and sell RECs similarly to Tier 1 projects. However, NYSERDA anticipates Build-Ready sites would mostly be auctioned off separate and apart from annual Tier 1 Renewable Energy Standard RFPs.

NYSERDA intends to develop a community benefits program early in the development of the Build-Ready process, which would include PILOT agreements. As part of the Build-Ready process, NYSERDA would consult with the New York State Department of Environmental Conservation to determine whether there are environmental justice communities near a proposed project that could receive community benefits. NYSERDA would also consult with Empire State Development and the Department of Labor to identify funding needs for local green job workforce training and if so, would establish a program for such support.

NYSERDA’s Petition proposes an almost $72 million budget to fund the Build-Ready program through 2025. Of that amount, NYSERDA is requesting $50 million from the Clean Energy Fund Cash Balances.

The PSC is expected to act on the Petition within 4 months, as directed by AREGCBA.