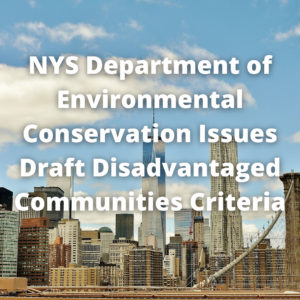 On March 9, 2022, the New York State Department of Environmental Conservation (DEC or the Department) issued draft criteria developed by the Department’s Climate Justice Working Group (CJWG or Working Group) for identifying disadvantaged communities in New York State. The CJWG was established under the Climate Leadership and Community Protection Act of 2019 (CLCPA) and is comprised of representatives from environmental justice communities statewide, as well as representatives from DEC, the State Departments of Health and Labor, and the New York State Energy Research and Development Authority (NYSERDA).

As previously covered by the SPR Blog, the CLCPA requires DEC to establish statewide greenhouse gas (GHG) emissions limits that achieve emissions reductions of 40% by 2030 and 85% by 2050, compared to the baseline of 1990 GHG emissions. A keystone of the CLCPA is its requirement that the State direct resources to ensure that disadvantaged communities receive at least 35%, with the goal of 40%, of overall benefits of State spending on clean energy and energy efficiency programs, defined to include investments in the areas of housing, workforce development, pollution reduction, low-income energy assistance, and energy, transportation, and economic development projects. The CLCPA tasked the Working Group with establishing criteria for identifying disadvantaged communities for this purpose. The criteria will also enable the State to comply with the CLCPA’s statutory mandate that any regulations promulgated by DEC prioritize measures to maximize net reductions of GHG emissions and co-pollutants in identified communities.