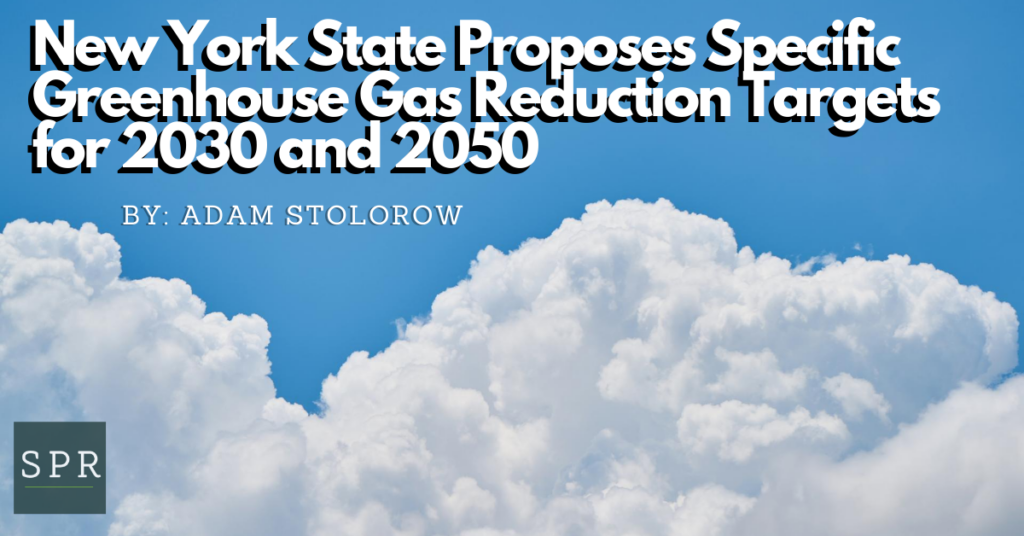 The New York State Climate Leadership and Community Protection Act of 2019 (CLCPA) requires statewide reductions of greenhouse gas emissions of 40% by 2030 and 85% by 2050, as compared to 1990 levels, in order to help slow the rate of global climate change. The CLCPA directed the New York State Department of Environmental Conservation (NYSDEC) to issue regulations establishing the benchmark and emissions targets.

In proposed regulations published on August 19, 2020, NYSDEC sets forth the 1990 baseline levels and statewide emissions targets for 2030 and 2050. NYSDEC used a greenhouse gas calculation methodology developed by the International Panel on Climate Change (IPCC), a methodology called GWP20, with input from the New York State Energy Research and Development Authority (NYSERDA), which maintains an inventory of statewide emissions sources. Based on 1990 levels of 401.83 million metric tons of carbon dioxide equivalent emissions, the statewide cap for greenhouse gases in 2030 will be 240.83 million metric tons. In 2050 it will drop to 60.21 million metric tons. These levels are roughly in line with California’s future emissions targets, which were recently recalculated using the same IPCC methodology. NYSDEC’s proposed regulations establish statewide emission limits on naturally occurring and manmade gases-carbon dioxide, methane, nitrous oxide, hydrofluorocarbons, perfluorocarbons, and sulfur hexafluoride.

The regulations themselves only establish the future statewide emissions caps and do not set compliance obligations for particular economic sectors or entities.  The CLCPA obligates New York to take concrete steps to achieve the emissions reduction goals, and the state must now prepare plans as to how it will meet its ambitious targets and comprehensively reduce carbon emissions across different sectors of the state economy.  Environmental groups will undoubtedly scrutinize New York’s plan, once it is published, to determine whether it will be sufficient to meet the state’s ambitious 2030 and 2050 goals.  Although the state’s 22-member Climate Action Council has been established and has started its work, environmental groups are pushing the state to move more quickly on implementation of the law.

NYSDEC is accepting comments on the proposed emissions limits through October 27, 2020.  Two virtual public hearings will be held on October 20. The next meeting of the Climate Action Council is available via webinar on August 24, 2020.

NYSDEC published its finalized regulations on December 15, 2020, along with a response to public comments received on the August 2020 proposed regulations.  The documents are available on the NYSDEC website.  No material changes were made between the proposed and final version of the regulations, which are now codified at 6 NYCRR Part 496.