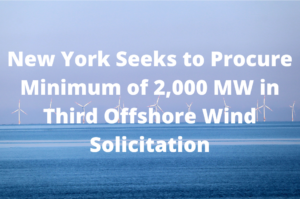 This ambitious goal is part of New York’s Climate Leadership and Community Protection Act (CLCPA), which mandates an orderly, just, and economic transition to clean energy; reduction of greenhouse gas emissions by 85% from 1990 levels by 2050; 100% renewable electricity generation by 2040; and economy-wide decarbonization by 2050. Thus, the existing pipeline of contracted projects requires development of not only the offshore wind farms, but also resilient port facilities in the State’s Capital Region and in Brooklyn to support the continuing growth of New York’s offshore wind industry.

As discussed in a previous SPR Blog post, Gov. Hochul previewed this third procurement earlier this year during the State of the State address and announced a plan to invest $500 million in offshore wind manufacturing, ports, and supply chain infrastructure by leveraging private capital to create $2 billion in economic activity and to support 2,000 new jobs. Gov. Hochul also announced the initiation of a cable corridor and interconnection study. Meanwhile, while not abandoning the current single-project “radial” transmission approach, the New York State Public Service Commission’s (PSC’s) Order on Power Grid Study Recommendations signaled a movement toward a “meshed” offshore grid design that would support the interconnection of multiple wind projects for joint transmission to onshore facilities.

In accordance with the PSC Order, the third OREC procurement requires all bids to include designs for integration into a mesh network, inclusion of energy storage facilities, and the use of high-voltage, direct current (HVDC) cables to maximize current resources to an injection point in NYISO Zone J or K (New York City and Long Island, respectively). NYSERDA has also encouraged bidders with proposed injection points in Zone J to prepare alternate proposals that would use the “Con Edison Hub,” a proposed Clean Energy Hub to be sited in northwest Brooklyn, which would create “on-ramps” for up 6,000 MW of offshore wind for subsequent delivery to New York City customers through the existing local distribution infrastructure. Each proposed facility must represent a minimum offer capacity of either 1,000 MW (or the maximum capacity available from the Proposer’s lease area if less than 1,000 MW), and may use either an index OREC (with adjustable prices) or fixed OREC (with pre-determined prices) pricing structure.

In addition, all bidders must include stakeholder engagement plans, workforce and job plans, and propose a Supply Chain Investment Plan to advance port and supply chain infrastructure for offshore wind, including the investment of up to $300 million in State funding. Proposals may also include plans to repurpose existing downstate fossil fuel-based generation infrastructure to enhance grid reliability and address the just transition of former generation plant workers to new clean energy employment opportunities.

Proposals for the third OREC procurement are due December 22, 2022, with an award expected to be announced in the first quarter of 2023 and a contract anticipated to be signed by the end of the following quarter.

SPR is proud to be part of the team representing Equinor on the permitting and development of the Empire Wind 1, Empire Wind 2, and Beacon Wind offshore wind projects.