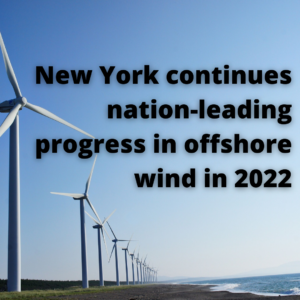 As 2022 kicks off, New York is already building on its leadership in development of offshore wind capacity, with nation-leading investments, new lease areas, and permit approvals.

On January 5, as part

of the State of the State, Governor Kathy Hochul announced a plan to invest $500 million in offshore wind manufacturing, ports, and supply chain infrastructure, leveraging private capital to create $2 billion in economic activity and to support 2,000 new jobs. These investments signal the State’s commitment to offshore wind, including the five projects currently in development off the coast of New York that will deliver over 4,300 megawatts of energy to the State. During the State of the State, Gov. Hochul also announced that the New York State Energy Research and Development Authority (NYSERDA) would be launching its next offshore wind procurement in 2022 for at least 2,000 megawatts and would also begin work on a new offshore wind master plan. Gov. Hochul also announced the initiation of a New York State Cable Corridor Study that will identify potential cable corridors and interconnection points that minimize the onshore and ocean floor impacts of transmission.

Transmission was also the focus of a January 20 Order on Power Grid Study Recommendations by the New York State Public Service Commission (PSC). The Order, which arose from the Accelerated Renewable Energy Growth and Community Benefit Act’s requirement to undertake a comprehensive study of transmission and distribution system needs, follows on recent power grid studies and reports undertaken by the PSC and NYSERDA. While not abandoning the current “radial” transmission approach, the Order signals that “it is time to consider a different approach” and a movement toward a meshed offshore grid design that supports multiple projects. The Order directs changes to NYSERDA’s offshore wind procurement program, requiring all bids to include designs for integration into a mesh network and incentivizing proposals that include energy storage facilities. The Order further directs that NYSERDA require use of high voltage direct current (HVDC) cables to maximize current resources, and authorizes Con Edison to petition for a hub that can facilitate interconnection and injection of offshore wind power into New York City, with attention to resiliency. Representatives from the PSC, NYSERDA, and utilities will convene a larger working group to focus on dynamic line ratings, power flow control devices, and energy storage for transmission and distribution services, with a proposal due within six months.

In mid-January, Gov. Hochul announced that the State had finalized purchase and sale agreements with Empire Wind Offshore LLC and Beacon Wind LLC (both of which are partnerships between Equinor and bp). These agreements account for 2,490 megawatts of the current project pipeline, enough to power 1.3 million homes. The contracts support public and private funding commitments, including $357 million for a wind tower manufacturing facility at the Port of Albany, and $287 million in an offshore wind staging and assembly facility at the South Brooklyn Marine Terminal, which is owned by the City of New York and managed by New York City Economic Development Corporation (NYCEDC). Both the Port of Albany and South Brooklyn Marine Terminal projects had been named recipients of large grants from the US Department of Transportation’s Maritime Administration’s Port Infrastructure Development Program at the end of 2021. Gov. Hochul also announced the first two awards for early workforce development for disadvantaged communities under the State’s Offshore Wind Training Institute. The award recipients included Hudson Valley Community College and LaGuardia Community College.

At the federal level, on January 18, 2022, the Bureau of Ocean Energy Management (BOEM) announced its final approval of the Construction and Operations Plan (COP) for the South Fork Wind Farm, an approximately 132 megawatt offshore wind farm being developed by Ørsted and Eversource off of Rhode Island that will deliver power to New York. The COP was originally submitted in June 2018, and BOEM’s approval provides the final green light to starting construction.

Meanwhile, on January 12, BOEM announced its final sale notice for six lease areas available for commercial offshore wind leasing in the New York Bight, totaling 488,201 acres—or approximately 5,600 to 7,000 megawatts of energy or enough to power two million homes. The final sale notice is the culmination of an extensive process that included a Call for Information and Nominations by BOEM in April 2018, notice and consultation with ocean users, and a proposed lease sale notice. The final lease areas reflect BOEM’s consideration of stakeholder input, including fisheries, and have deconflicted and reduced the lease areas by 72% from the initial Call and 22% from the proposed sale notice. The final sale notice also includes  requirements on bidders to limit potential antitrust violations and includes lease stipulations to encourage and incentivize project labor agreements and domestic procurement (not intended to supplant the Jones Act). BOEM will hold the auction on February 23, 2022. BOEM, New York, and New Jersey also recently announced a collaboration called a Shared Vision on the Development of an Offshore Wind Supply Chain. The group will meet quarterly to coordinate on shared goals related to the domestic supply chain and benefitting underserved, disadvantaged, and overburdened communities.

SPR is proud to be part of the team representing Equinor on the permitting and development of the Empire Wind 1, Empire Wind 2, and Beacon Wind offshore wind projects.