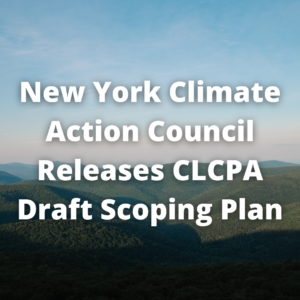 As previously discussed on the SPR Blog, the CLCPA, which was enacted in 2019, requires statewide greenhouse gas (GHG) emissions reductions of 40% by 2030 and 85% by 2050 compared to 1990 baseline levels. The CLCPA also mandates that the State derive 70% of its electricity from renewable energy by 2030 and procure 9,000 MW of offshore wind by 2035, 3,000 MW of energy storage by 2030, and 6,000 MW of solar by 2025. The Climate Action Council, an entity created by the CLCPA and comprised of representatives from state agencies and other key stakeholders, was charged with developing a scoping plan to make recommendations on regulatory measures and other actions that will help New York achieve these ambitious goals.

The Draft Scoping Plan, which is a comprehensive 341-page document, reflects the Council Action Council’s careful consultation with sector-specific advisory panels and working groups established by the CLCPA, including the Climate Justice Working Group and Just Transition Working Group (which advises on workforce issues). The Draft Scoping Plan sets forth a detailed framework for achieving the State’s climate goals, making recommendations in the transportation, building, electricity, industrial, agricultural and forestry, and waste sectors. The Draft Scoping Plan makes clear that achieving the CLCPA’s emissions targets will require transformative actions and investments across all sectors of the State’s economy, and highlights the importance of energy efficiency and end-use electrification in meeting emissions goals. It requires offshore wind, solar, and battery storage to power most of New York’s economy by 2050.

Some of the key measures identified in the Draft Scoping Plan include:

The Draft Scoping Plan details specific strategies to address each of these areas.

The Draft Scoping Plan is a comprehensive, detailed assessment of New York’s pathways to emissions reduction across all sectors.  Although much more work remains, it represents a crucial step towards achieving the State’s ambitious climate goals and provides a clear signal to the regulated community of what is to come.