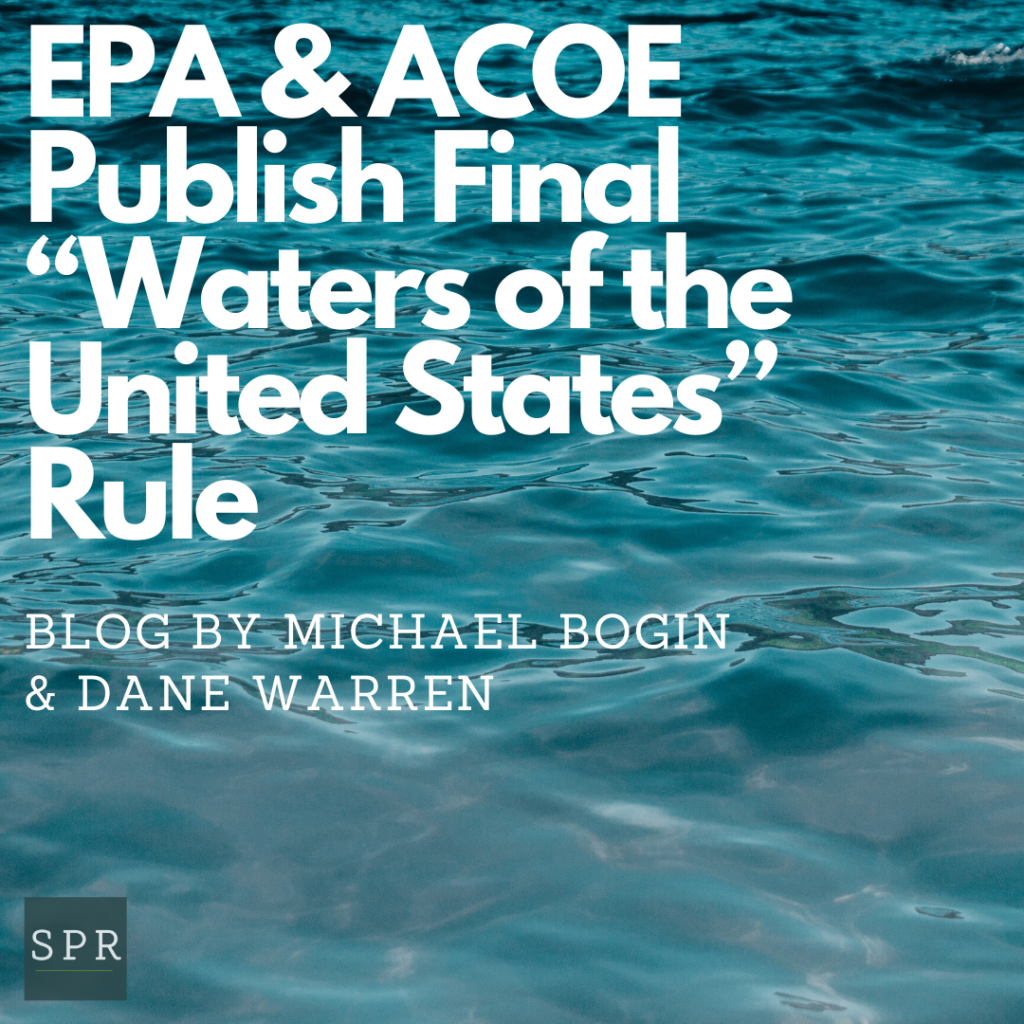 On April 21, 2020, the Environmental Protection Agency and the U.S. Army Corps of Engineers (together, the “Agencies”) published a final rule in the Federal Register redefining the term “waters of the United States” (“WOTUS”) under the Clean Water Act (“CWA”).  The Agencies previously issued pre-publication notice of the final rule on January 23, 2020.  The publication of the new rule is the second step in a two-part rulemaking that began with the issuance of Executive Order 13,778, titled “Restoring the Rule of Law, Federalism, and Economic Growth by Reviewing the ‘Waters of the United States Rule’” (the “Executive Order”).  The Executive Order directed the Agencies to “review” the 2015 Clean Water Rule (the “2015 Rule”), and “consider interpreting the term ‘navigable waters’ . . . consistent with the opinion of Justice Antonin Scalia in Rapanos v. United States, 547 U.S. 715 (2006).”

The new rule narrows the Agencies’ jurisdiction in several critical respects, including:

The Agencies state that this narrower approach is required by both the text of the CWA and a need to avoid exceeding Congress’s authority under the Commerce Clause.  The Agencies acknowledge that their interpretation of WOTUS departs from the 2015 Rule, and they justify that change by citing federal agencies’ traditional authority to reinterpret ambiguous statutory text.  This justification, along with the Agencies’ reliance on Justice Scalia’s plurality opinion in Rapanos, will likely be the focus of upcoming litigation challenging the new rule, which will take effect on June 22, 2020.

Although the Agencies state that the new rule will “provide[] clarity and predictability,” the regulated community should expect to see considerable uncertainty, at least in the short term.  Because lawsuits challenging the new rule must be filed in federal district courts, litigation against the 2015 Rule led to a patchwork of inconsistent decisions and regional variation; before its revocation in October 2019, the 2015 Rule was effective in 22 states (plus the District of Columbia and U.S. Territories) and enjoined in 28 states.  (Our analysis of litigation involving the 2015 Rule can be found here.)  A federal district court could conceivably issue a nationwide injunction; however, the Supreme Court has recently approached nationwide injunctions with skepticism, and district courts may be reluctant to wade into that dispute.

Critically, although the new rule will narrow the Agencies’ jurisdiction under the CWA, it specifically acknowledges that a state may exercise jurisdiction over a wider range of waters or impose more stringent regulations under state law.  Thus, the new rule does not affect certain state laws, such as the New York Tidal Wetlands Act, the Freshwater Wetlands Act, and their implementing regulations.