Michael has a long and successful practice of assisting clients to obtain voluntary cleanup agreements (VCAs) and brownfield cleanup agreements under the State Voluntary Cleanup Program (VCP) and later under the State Brownfield Cleanup Program (BCP). Among other projects, Michael obtained a VCA for the remediation of coal tar contamination at the former Keyspan (now National Grid) Manufactured Gas Plant (MGP) site located at Second Avenue and the Gowanus canal in Brooklyn; he also secured BCAs for the cleanup of petroleum contamination at Con Edison’s former power plant properties on First Avenue in Manhattan.

Michael has a robust set of experiences working with government. He has represented many municipalities and school districts in complying with their environmental mandates under the Clean Water Act, federal and state freshwater wetland laws, the New York City watershed regulations and the State Environmental Quality Review Act. Following hurricanes Irene and Sandy, Michael has also developed significant expertise in coastal resiliency and FEMA flood zone mapping issues.

SPR represents the purchaser of this one-time copper smelter property and listed Class-2 Inactive Hazardous Waste Site who is redeveloping its approximately 39-acres for commercial and light industrial use. Working closely with the prior owner, the developer and the regulators, SPR helped secure the Record of Decision and other regulatory approvals that have cleaned up this long-contaminated waterfront parcel and brought much needed development and jobs to this area after years of decline.
Development And Land Use

The Firm helped obtain Tidal Wetland permits, a Coastal Erosion Hazard Area revision and permit, a Solid Waste Beneficial Use Determination and Oil Spill Program closures for the development of a large retail development and public park.
Development And Land Use

SPR is environmental counsel to the Long Island Power Authority (LIPA) and represented LIPA in connection with the preparation of an Environmental Impact Statement for the construction of a transmission line between the LIPA substations located in Southampton and Bridgehampton on the East End of Long Island. The project, which also included an expansion of the Bridgehampton substation, was controversial because of the proposal to install part of the line above ground on poles installed along the route of existing overhead distribution lines. SPR led the EIS project team and defended LIPA when its project approval was challenged in New York State Supreme Court. The matter was successfully resolved when LIPA and the Town of Southampton entered into an agreement on a funding mechanism to permit the entire installation of the line underground without burdening LIPA ratepayers as a whole with the expense for that additional work.

For: Center for Creative Land Recycling

“Flood Zones: Where Does Your Property Stand in Our Post-Sandy State?”

For: Real Estate Board of New York’s (REBNY), Panelist

For: Hofstra University School of Law, Co-Chair and Panelist

For: The Environmental Counselor 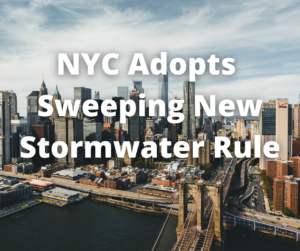 On April 21, 2020, the Environmental Protection Agency and the U.S. Army Corps of Engineers (together, the “Agencies”) published a final rule in the Federal Register redefining the term “waters of the United States” (“WOTUS”) under the Clean Water Act (“CWA”).  The Agencies previously issued pre-publication notice of the ...
Read More

In recent years, the unpredictability of the National Flood Insurance Program (“NFIP”), administered by the Federal Emergency Management Agency (“FEMA”) has given rise to increasing uncertainty and frustration for coastal and waterfront markets located within Special Flood Hazard Areas. The NFIP program, which provides flood insurance for approximately Read More