By Aaron Goldman and Alexis Saba 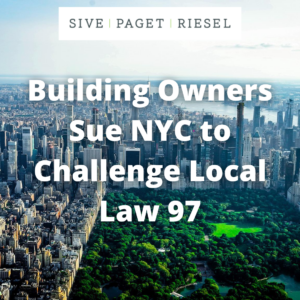 Marking the first legal challenge to NYC Local Law 97 of 2019 (Local Law 97) since its enactment, a group of building cooperatives, residents, shareholders, and a real estate company (Plaintiffs) sued the City of New York, the New York City Department of Buildings (DOB), and the DOB Commissioner (collectively, Defendants) on May 18, 2022. As previously covered on the SPR Blog, Local Law 97 aims to reduce buildings’ greenhouse gas emissions 40 percent by 2030 and 80 percent by 2050 by requiring large buildings to meet emission limits starting in 2024.

The complaint in Glen Oaks Village Owners, Inc. v. City of New York, Index No. 154327/2022 (Sup. Ct., NY Cnty.) (Complaint) seeks to overturn Local Law 97 on the alleged grounds that it: (i) is preempted by the New York State Climate Leadership and Community Protection Act of 2019 (CLCPA); (ii) violates due process because it levies excessive penalties against property owners, is retroactive, and is impermissibly vague; and (iii) constitutes an unauthorized tax, contrary to state constitutional and statutory provisions.

Plaintiffs’ second cause of action alleges Local Law 97’s penalty of $268 per metric ton of carbon dioxide equivalent over the emissions limit is so excessive and disproportionate to the violation that it shocks the conscious, thereby violating Plaintiffs’ due process rights. Plaintiffs argue that penalties are imposed unfairly because Local Law 97 calculates building emissions based on raw energy usage without accounting for efficiency factors such as tenant density, the energy intensity of the business activity, and hours of operations.

In their third cause of action, Plaintiffs claim Local Law 97 violates their due process rights because it is purportedly retroactive, allegedly penalizing buildings as designed and constructed prior to the Law’s enactment rather than regulating prospective conduct.

In their fourth cause of action, Plaintiffs argue Local Law 97 is unconstitutionally vague due to its lack of information about future emission limits, the penalty assessment and mitigation process, and whether emissions adjustments will be available. Plaintiffs contend that Local Law 97 leaves too much discretion to regulatory agencies and that entities currently pursuing compliance with 2024’s emission limits lack certainty as to whether their efforts will satisfy future emissions limits.

Lastly, Plaintiffs assert that Local Law 97 penalties effectively operate as a tax on carbon emissions rather than a fine, claiming the penalties do not benefit the regulated community or further any regulatory goal related to climate change. In support of this argument, Plaintiffs observe that Local Law 97 penalties go to the City’s general fund and not to any environmental program. Plaintiffs therefore allege Local Law 97 violates provisions of the New York Constitution and Municipal Home Rule Law obligating New York City to obtain authorization from New York State to levy new taxes.

Outside of their causes of action, Plaintiffs raise two generalized concerns with Local Law 97 and its implementation thus far. They express frustration that DOB has not issued regulations and guidance regarding the special circumstances adjustments identified in Local Law 97 and that DOB belatedly provided information about two other adjustments with application deadlines in 2021. Plaintiffs also claim that Local Law 97 encourages building electrification that will leave New York City vulnerable to power outages.

As of this Blog post, the parties have filed a stipulation setting July 28, 2022 as the deadline for Defendants to respond to the complaint.