Meg has challenged and defended projects under the New York State Environmental Quality Review Act and represented potentially responsible parties in CERCLA proceedings. She has experience with matters arising under a variety of federal environmental laws, including the Clean Air Act, the Clean Water Act, the Resource Conservation and Recovery Act, and the National Environmental Policy Act.  Meg also has experience advising clients on permitting and environmental review for offshore wind projects.

Prior to joining the firm in 2018, Meg was an Assistant Corporation Counsel in the Environmental Law Division of the New York City Law Department. During her time at the City of New York, she represented the City and its agencies in federal and state environmental litigation, and assisted City agencies with environmental regulatory compliance.  Before working for the City, Meg clerked on the District of Columbia Court of Appeals.

Meg is a graduate of Harvard Law School, where she served as Editor-in-Chief of the Harvard Environmental Law Review and was a student attorney for the Emmett Environmental Law & Policy Clinic. Before law school, Meg worked for an environmental nonprofit in New Delhi, India.

“Environmental Law: Developments in the Law of SEQRA, ” Co-author 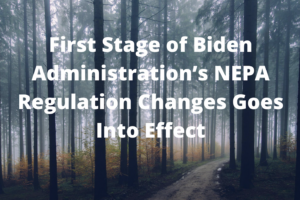 On May 20, 2022, the Council on Environmental Quality’s (CEQ’s) first round of revisions to the Trump Administration’s 2020 NEPA regulations went into effect. These Read More

Last month, we wrote about a recent decision from the US District Court for the District of Montana vacating Nationwide Permit (“NWP”) 12, the general permit issued by the Army Corps of Engineers (“Corps”) for pipelines and other utility projects. On May 11, the court ...
Read More

U.S. District Court for the Southern District of New York

U.S. District Court for the Eastern District of New York