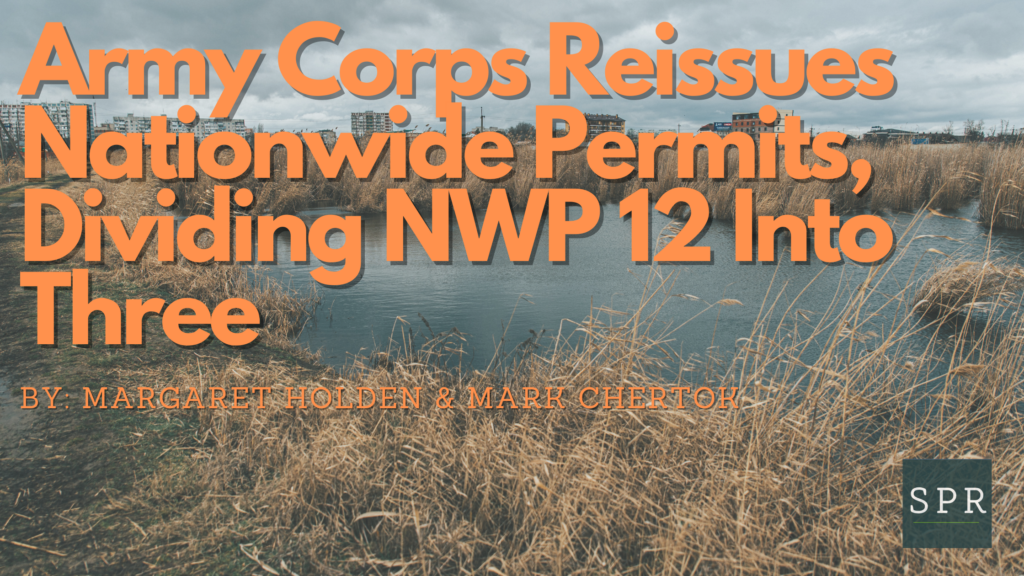 By Meg Holden and Mark A. Chertok

Nationwide permits provide a streamlined process for the Corps to authorize activities under Section 404 of the Clean Water Act and/or Section 10 of the Rivers and Harbors Act of 1899 that have no more than minimal individual and cumulative adverse environmental effects. NWPs expire every five years, and the Corps typically reissues the permits on a five-year cycle.  However, under 33 CFR § 330.6(b), the Corps may modify, reissue, or revoke the NWPs at any time.

The existing NWP 12 authorizes eligible discharges of dredged or fill material into waters of the United States in connection with the construction, maintenance, repair, and removal of utility lines, including oil and gas pipelines, water and sewer pipes, and electric, internet, and cable lines. The new rule divides the existing NWP 12 into three separate NWPs – NWP 12 and two new NWPs, NWP 57 and 58.

In addition to dividing NWP 12 into three separate permits, the Corps’ final rule also introduced new NWPs to authorize two types of mariculture activities that are not currently authorized by NWP 48 – farming seaweed (NWP 55) and finfish aquaculture (NWP 56).  The rule also modified and reissued the general conditions and definitions for the 16 modified NWPs.  The remaining 40 NWPs issued in 2017 remain in effect through March 18, 2022, their scheduled expiration date.

The NWPs streamline the regulatory process for the applicable types of projects by eliminating pre-construction notification requirements.  The division of NWP 12 into three separate permits also allowed the Corps to adopt a more tailored approach to utility line projects by the establishment of industry-specific standards for different types of projects.  Furthermore, one of the Corps’ stated goals of this final rule is to “help enhance regulatory certainty for utility line sectors that are not a frequent target for litigation.”  As we have previously written, the use of  NWP 12 for oil and gas pipelines has been the subject of significant litigation.  In April 2020, the U.S. District Court for the District of Montana vacated NWP 12 due to the Corps’ failure to conduct a consultation under section 7 of the Endangered Species Act (“ESA”); the next month, the vacatur was narrowed to just oil and gas pipeline projects.  In July 2020, the U.S. Supreme Court further limited the ruling, staying the District Court’s order granting partial vacatur except as it applied to the Keystone XL Pipeline.

The division of NWP 12 into three separate permits may help ensure that electricity and other less controversial infrastructure projects are not disrupted by future litigation over oil and gas pipeline projects.  However, despite the district court’s April ruling that reissuance of NWP 12 violated the ESA, the Corps again did not undertake an ESA consultation when issuing this new rule; instead, it determined that the issuance of the rule will have “no effect” on endangered or threatened species or critical habitats.  Thus, these new NWPs – and most particularly the revamped NWP 12 – are vulnerable to litigation on the same basis under which courts have vacated the use of NWP 12 for the Keystone XL Pipeline.  Moreover, the rule has already been subject to significant criticism, with many commenters opposing the elimination of many preconstruction notice requirements for NWP 12 and advocating for the Biden Administration to undo the rule.  Ultimately, whether the rule ultimately accomplishes the Corps’ stated goals of streamlining process and increasing regulatory certainty remains to be seen.