By Alexis Saba and Steven Barshov 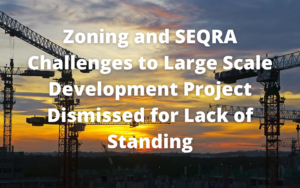 On November 4, 2021, Justice St. George of the New York State Supreme Court issued two identical decisions denying standing to the Long Island Pine Barrens Society, the Group for the East End, a NYS Assembly member, and various property owners who had collectively commenced a pair of proceedings challenging the approval of a residential subdivision with a private golf course proposed by the Discovery Land Company in the East Quogue hamlet in the Town of Southampton. See Thiele et al. v. Town of Southampton Zoning Board of Appeals et al. (No. 6685/18) and Thiele et al. v. Town of Southampton Planning Board et al. (No. 6209/19). (Note that Assembly Member Thiele was ordered stricken from the caption and thus the cases will be denominated hereafter as Amper et al. v. . . ) The petitioners challenged an interpretation of the Town zoning code by the Zoning Board of Appeals and the Planning Board’s review of the project pursuant to the State Environmental Quality Review Act (SEQRA). Courts often reject standing defenses in similar challenges where the petitioners own property proximate to the challenged development site. These decisions limit nearby property owners’ ability to rely on mere proximity to establish standing in environmental and land use actions where there are intervening land uses or open space, and provide a framework for scrutinizing standing in neighbor challenges. Sive, Paget & Riesel, led by Steven Barshov, represents Discovery Land.

Discovery’s proposed development includes 118 residences, a private golf course, and other amenities, all of which will be separated from adjacent and nearby property owners by a buffer of permanently protected forested land, as well as roads, railroad tracks, and other infrastructure and development. In both cases, the property owner petitioners predicated their standing on the presumption of injury due to proximity to the development site. The petitioners also alleged harms to the drinking water aquifer, as well as an interest in protecting and preserving the Long Island Pine Barrens.

The Court rejected the petitioners’ claim that proximity to Discovery’s property was sufficient to confer standing. Following the analysis and adopted in Matter of Tuxedo Land Trust, Inc. v. Town of Tuxedo, 34 Misc.3d 1235(A) (Sup. Ct. Orange Cnty. 2012), aff’d 112 A.D.3d 726 (2d Dep’t 2013), in which SPR represented the developer, Justice St. George held that, when evaluating proximity for standing purposes, “the relevant distance is the distance between the petitioner’s property and the actual structure or development itself, not the distance between the petitioner’s property and the property line of the site.” Here, not only were the property owner petitioners distant from the nearest proposed development site, but also there were substantial permanently protected forested areas and other land uses between the petitioners’ properties and the proposed development. Thus, the adjoining/nearby property owners were not entitled to a presumption of standing based on proximity.

The Court also rejected the petitioners’ other allegations of injury as not different than the public at large. As to purported harms from groundwater contamination, Justice St. George found there was no proof of potential adverse groundwater impacts—but that even if there were, the uncontroverted evidence established that all petitioners received their water from a public water supply system providing safe drinking water. Because none of the petitioners drew drinking water directly from the aquifer via private wells, their interests were no different than the public’s generally. The Court also held that neither generalized interest in environmental conservation and in protection of the Pine Barrens, nor being a titular head of an environmental organization devoted to such causes, was sufficient to confer standing. Accordingly, all challenges to the approval of Discovery’s proposed development were dismissed with prejudice.