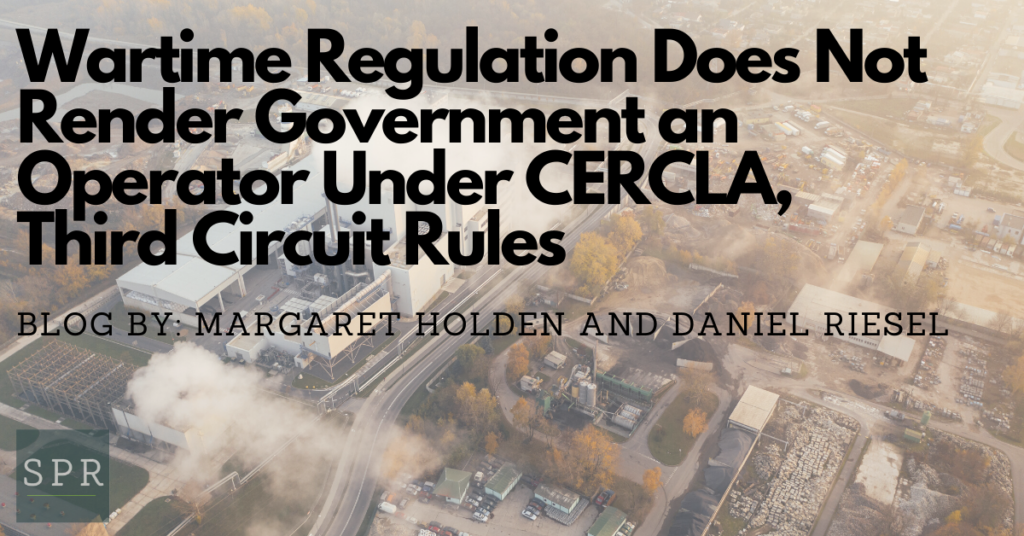 Wartime Regulation Does Not Render Government an Operator Under CERCLA, Third Circuit Rules

By Meg Holden and Daniel Riesel

On May 4, 2020, the Third Circuit issued a decision in PPG Industries v. United States, a case which considered whether the government’s involvement at a chromium processing plant during World War II made it an “operator” liable for cleanup costs under Section 107 of the Comprehensive Environmental Response, Compensation, and Liability Act (“CERCLA”).  The court upheld the district court’s ruling that the government was not an operator because it did not exert control over the plant’s pollution-related activities; rather, its actions were consistent with the general wartime influence over the industry.

Plaintiff PPG Industries’ (“PPG’s”) predecessor operated a chemical plant in New Jersey which processed chromium chemicals. During World War II, the government regulated the production of chromium, a critical war material that was used for forging armor for ships and tanks, anodizing aluminum for aircrafts, and tanning leather for soldiers’ boots. In addition to controlling the price of raw materials, involving itself in labor issues, and dictating production schedules, the government issued a directive to chromium processing plants to increase output. PPG’s predecessor responded to the demand for output by switching to a quicker process that generated more waste. The hazardous waste generated by the manufacturing process over the course of the plant’s life was mostly stockpiled outdoors, and eventually seeped into the soil and groundwater. Decades later, PPG entered into agreements with the State of New Jersey to remediate the contamination.

PPG sued the government under CERCLA, seeking contribution costs. Under CERCLA, parties who undertake cleanup efforts at contaminated sites may seek contribution from any other person who is liable or potentially liable for the contamination. Persons who “operated” the facility at the time of disposal of hazardous substance are among the potentially responsible parties.

PPG argued that the government was an “operator” of the plant within the meaning of CERCLA because of the government involvement and control over operations at the plant. The Third Circuit, invoking the U.S. Supreme Court’s 1998 opinion in United States v. Bestfoods, rejected PPG’s argument. In Bestfoods, the Supreme Court defined an “operator” for CERCLA liability as one that “manages, directs, or conducts operations specifically related to pollution.”  The Third Circuit held that the government’s involvement at the plant did not make it an “operator” under CERCLA because the government’s involvement was not specifically related to pollution. For example, the government did not direct how the raw materials should be processed, how the chemicals were to be made, or how waste was to be handled. The Court explained that control over the site does not render the controlling party an operator, unless that control involves a direct involvement in the release or disposal of the contaminants.

This decision is the latest in a number of cases across the country seeking the recovery of response costs or contribution from the U.S. government for environmental cleanup costs at industrial facilities that the government engaged to produce goods for World War II. The Third Circuit’s decision continues the distinction first made in Bestfoods distinguishing between general oversight of a “controlled” party and the controlling party’s direct involvement in the release of hazardous substances.