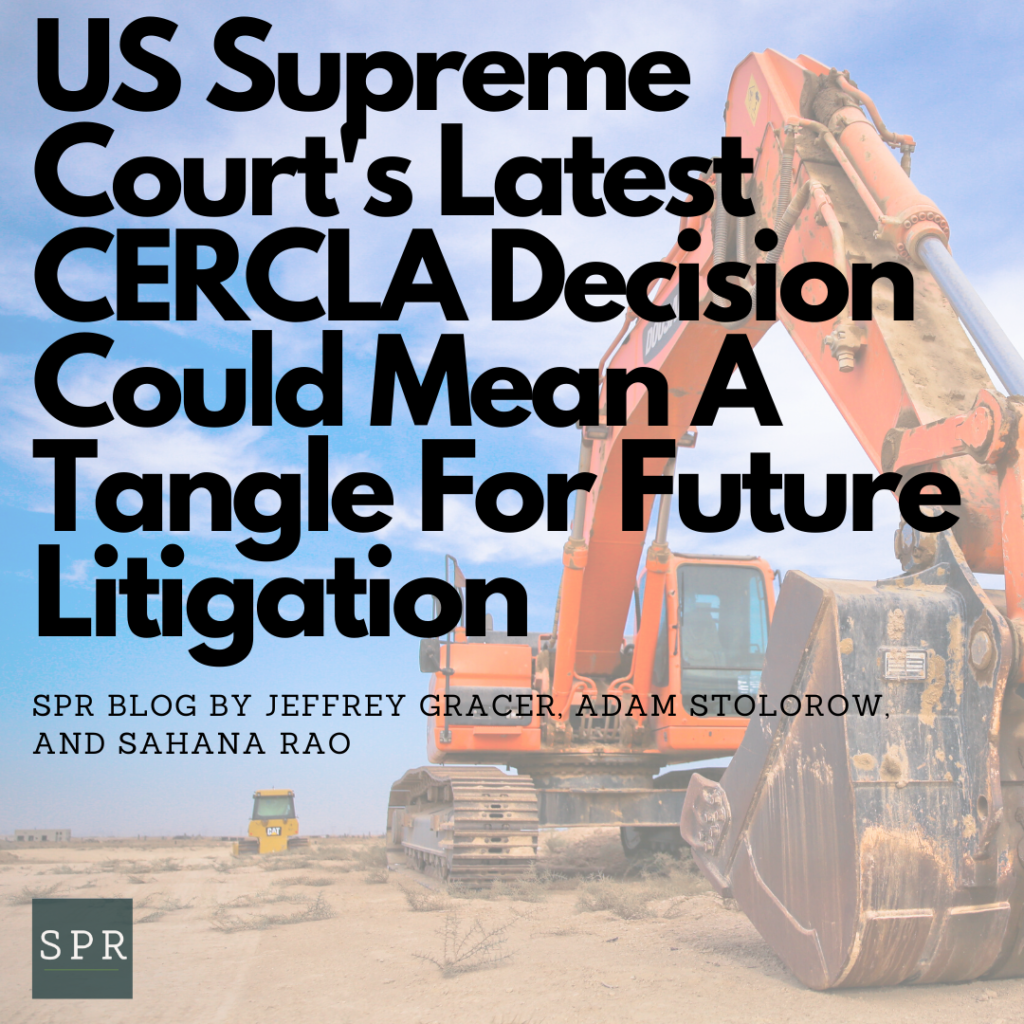 By Jeffrey B. Gracer and Private: Sahana Rao

On April 20th, 2020, the United States Supreme Court held in Atlantic Richfield Co. v. Christian that the Comprehensive Environmental Response, Compensation and Liability Act (CERCLA) does not prevent state courts from hearing state law claims by landowners seeking property damages and additional environmental remediation at federal Superfund sites beyond an EPA-approved remedy. Complicating this holding, the Court also held that if such a landowner is a potentially responsible party (PRP) under CERCLA, the landowner must obtain approval from EPA for any remediation plan that results from the state court decision. The decision creates more potential legal tangles in an already complex liability regime.

The case involves a Superfund site near Butte, Montana where copper smelters refined millions of tons of copper ore for over a hundred years. EPA designated an area over 300 square miles encompassing the smelters as a Superfund site in 1983 pursuant to the newly enacted CERCLA. Since then, the Atlantic Richfield Company (which merged with the company that operated the smelters) has been remediating the site under EPA’s oversight.

In 2008, a group of plaintiffs owning property within the Superfund site sued Atlantic Richfield in Montana state court, asserting state tort claims for trespass, nuisance, and strict liability. These landowners sought “restoration damages” under Montana law to remediate their properties to a level surpassing the EPA-approved cleanup plan. Atlantic Richfield argued that Section 113 of CERCLA stripped Montana state courts of jurisdiction to consider plaintiffs’ state law claims because federal courts have exclusive jurisdiction over cases “arising under” CERCLA, and because the grounds for challenges to EPA-approved remedies in federal court are limited by law. The case made its way up to the Montana Supreme Court, which rejected Atlantic Richfield’s arguments, leading to the appeal before the U.S. Supreme Court. The United States filed an amicus brief in support of Atlantic Richfield’s position that the proposed restoration plan was a challenge to an EPA remedy prohibited by CERCLA.

The first significant holding of Chief Justice Roberts’ opinion (Part II-B, joined by all but Justice Alito), is that Section 113 of CERCLA does not deprive state courts of jurisdiction over common law property claims related to Superfund sites, because such claims “arise under” state common law, not CERCLA. Although CERCLA Section 113(h) narrowly limits the grounds for challenging an EPA-approved remedy in federal court, eight justices agreed that Section 113(h) does not limit the jurisdiction of state courts with respect to state law claims.

The second part of the Court’s opinion (Part III, from which Justices Gorsuch and Thomas dissented) is that, as PRPs covered under Section 107(a) of CERCLA, which ascribes liability to current owners of contaminated sites, the owners of property within the bounds of a designated Superfund site must obtain authorization from EPA pursuant to Section 122(e) before they can undertake additional remedial work at a Superfund site where remedial investigation has been initiated pursuant to CERCLA. In so holding, the Roberts majority opinion read the statutory term “potentially responsible person” in Section 122(e) as equivalent to the term “covered person” in Section 107, and found that the landowners’ PRP status was not eradicated by either the running of the statute of limitations period for response cost recovery actions or the availability of defenses such as the “innocent landowner” defense.

In keeping with the above, the Court remanded the case for the Montana landowners to seek EPA’s approval of their proposed restoration plan.

The Court’s decision in Atlantic Richfield opens the door for aggrieved property owners to challenge the sufficiency of federal cleanup of Superfund sites via common law claims in state courts, and for tort plaintiffs to avoid the assertion of a Section 113(h) defense by alleged polluters. This will create significant uncertainty for entities undertaking federally-supervised remediation of Superfund sites owned by other parties who may use the availability of state common law claims to try to leverage stricter and more exhaustive cleanups than what EPA has determined is protective of human health and the environment under CERCLA. While most states allow restoration damages under certain circumstances, the likelihood of obtaining this remedy (and thereby prompting a state court to effectively re-examine the sufficiency of an EPA-approved Superfund cleanup) varies by state and requires proof beyond the diminution of property values. It remains to be seen whether the relative difficulty of proving the need for remedial work beyond the EPA-mandated remediation will temper the flow of state law claims.

The Court explicitly attempts to balance the availability of these state court actions with the requirement that owners of property within Superfund sites obtain permission from EPA before undertaking any remedial work at the site. This requirement is intended to ensure that even where landowners prevail on common law claims in state court, the agency can still act to avoid inconsistencies in remedial action that would inflate the cost of remediation—or worse, endanger human health or the environment. This aspect of the decision may also effectively preclude claims seeking injunctive relief and even for prospective restoration damages in advance of EPA approval, as a state court arguably could not order injunctive relief or payment of damages for work not approved by EPA.  However, it remains to be seen how state courts will view the effect of the limitation of their ability to grant relief.

Thus, despite the Court’s balancing act, this decision may result in a tangle of decisions from a federal agency and state and federal courts and lead to further litigation necessary to unravel them. In addition to raising procedural questions, the Court’s ruling raises questions about the relative power of federal and state courts. For example, if a state court awards restoration damages based on a property owner’s restoration plan, EPA’s subsequent approval or disapproval of the restoration plan based on its consistency with a Superfund cleanup may be a final agency determination  subject to challenge, this time in federal court. This raises the question of whether such a determination essentially forms a part of the Superfund remedy that is not subject to challenge except in the limited circumstances prescribed by Section 113(h) – another question left open by the Court, and which may arise in future litigation.

Where EPA rejects remediation that has been approved as a measure of damages by a state court, a federal court hearing a challenge to the EPA rejection (if it accepts jurisdiction) will be forced to weigh the agency’s expertise against the state court’s remedial power at common law. Additional questions could arise where a state environmental agency is the entity seeking additional remediation of a Superfund site in state court. A federal court will be in the position of comparing each agency’s expertise in arriving at an appropriate remedy.

As has happened with other CERCLA precedents, it could be that the practical result of this ruling is fairly narrow over the long term, with state courts and state court litigants recognizing that EPA’s effective veto power on potential remedies means that such remedies must not be inconsistent with the existing Superfund cleanup, or that challenges must be asserted through avenues allowed under CERCLA rather than collateral routes ultimately ending up at the same place. The most likely immediate practical effect is that state court defendants will be unable to raise Sections 113(b) or (h) as defenses against state law claims.

Stay tuned to our blog for further updates as SPR continues to examine these complicated issues.