By Kevin Rogers and Jennifer Coghlan 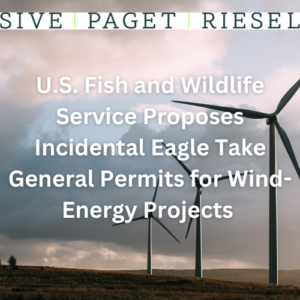 The United States Fish and Wildlife Service (USFWS) recently proposed to develop a general permit under the Bald and Golden Eagle Protection Act (the Eagle Act) for the incidental take of eagles associated with qualifying wind-energy projects and power lines, as well as disturbance take and nest take. This blog post provides a discussion of certain noteworthy changes proposed for the incidental take permitting regime with respect to wind-energy projects.

Background and Rationale for the Proposed General Permit-Approach

The USFWS is the Federal agency responsible for managing bald eagles and golden eagles under the Eagle Act. The Eagle Act generally prohibits the take, possession, and transportation of bald eagles and golden eagles except when necessary to protect other local interests; any taking must be “compatible with the preservation of eagles.” Similar to its definition under the Endangered Species Act, a “take” under the Eagle Act is defined as “pursue, shoot, shoot at, poison, wound, kill, capture, trap, collect, destroy, molest, or disturb.” A taking must be consistent with the two objectives of maintaining or increasing eagle breeding populations nationwide and the persistence of local populations throughout each species’ geographic range to satisfy this “eagle preservation standard.”

The USFWS has determined that the substantial administrative burdens placed on the regulated community by the existing permitting regime are more than what is required to effectively preserve bald eagles. Both the bald eagle population and the number of wind projects nationwide have increased in recent decades, resulting in heightened chances for bald eagles to collide with wind-energy infrastructure and for incidental takings to occur. However, the number of specific permit applications for incidental eagle takes has not reflected a commensurate increase.

Thus, the USFWS believes that the low permit application rate indicates that the current permitting regime authorizing only specific permits is too administratively burdensome and that creation of a general permit option would encourage broader participation in the permitting program.

Specific permits require applicants to submit a project-specific application for the incidental take of eagles, which the USFWS reviews and may approve with project-specific permit conditions for a permit term of up to 30 years. The USFWS proposes to retain the specific-permit approach for wind projects with high or uncertain risks to eagles; in those scenarios, the USFWS believes that the administrative burden imposed by a specific permit requirement is commensurate with the preservation of eagles standard.

In contrast, general permits are designed to be programmatic instead of project-specific. The USFWS proposes to make general permits available to authorize incidental take by activities with relatively consistent and low-impact effects on eagles and well-established avoidance, minimization, mitigation, and monitoring permit conditions. General permit terms would be nonnegotiable and fixed for the five-year term of the permit. A general permit applicant could self-certify that they meet the general permit eligibility criteria and that they will comply with all permit conditions and reporting requirements; USFWS review would not be required prior to obtaining a general permit.

The proposed general permit option for wind-energy projects would incorporate and expand upon the provisions of the existing USFWS regulations that apply to wind-energy facilities, currently codified at 50 CFR 22.80.

The USFWS proposes to use “relative eagle abundance” as a threshold eligibility standard for wind-energy general permits. For a wind-energy project to be eligible, seasonal eagle abundance at all existing or proposed turbine locations must be lower than all five of the below-listed abundance thresholds for bald and/or golden eagles, as applicable:

The USFWS estimates that nearly 80 percent of existing wind-energy turbines in the mainland United States are located within areas with relative eagle abundance values that are eligible for general permits.

Because relative abundance is a simplified means of estimating the potential impacts of a wind project on eagles, the USFWS proposes to pair the eagle abundance eligibility thresholds with a requirement that wind projects be sited greater than 660 feet from bald eagle nests and greater than two miles from golden eagle nests. Bald eagle populations were determined by USFWS to be capable of sustaining the occasional incidental take from wind-energy projects in those regions where general permits are proposed to be authorized. However, golden eagle populations are significantly smaller and more sensitive to incidental takes than bald eagle populations. Accordingly, the USFWS proposes that if a new golden eagle nest is constructed within two miles of a wind-energy project after issuance of its general permit, the permittee may continue to operate under the existing general permit only through the duration of the existing permit term and could not renew the general permit; this continuing general permit eligibility criterion does not apply to newly constructed bald eagle nests.

For existing wind projects only partially located within an area of relative eagle abundance above the designated thresholds for general permit eligibility, the USFWS will require the project sponsor to apply for a specific permit instead of a general permit. However, the applicant may request in its specific permit application that the USFWS consider granting it a general permit. The USFWS will then review the specific permit application and will issue a letter of authorization to apply for a general permit if the agency determines that the project is appropriately eligible for such. The USFWS expects to issue letters of authorization to most existing projects where either only a small percentage of the facility’s existing turbines are not located within a general permit-eligible area, or when an applicant provides monitoring data that demonstrates eagle fatality rates attributable to the existing project are consistent with those expected for general permits.

Notably, the proposed general permit would not authorize a specific number of eagles that may be taken but rather would broadly authorize the incidental take of eagles by wind-energy facilities.

For both general and specific permits, the USFWS proposes to continue requiring implementation of all practicable avoidance and minimization measures to reduce the likelihood of takes, such as reducing eagle attractants at a site. Visual scans for injured eagles and eagle remains are proposed to be conducted at a minimum of once every three months during the seasonal periods of highest eagle-use, to the maximum extent practicable. Any dead or injured eagle discovered within the project area, regardless of cause, must be reported to the USFWS within 2 weeks and in annual project reports. However, the USFWS proposes to eliminate the 2016 Eagle Rule’s existing requirement that third-party monitors conduct these visual scans; instead, the permittee’s on-site staff may be trained to perform the required monitoring activities.

The USFWS proposes that if three eagle injuries or mortalities attributable to a wind-energy project are discovered during a five-year general permit term, then the general permittee would be required to notify the USFWS within two weeks of the discovery and specify the additional avoidance and minimization measures that will be implemented after discovery of the third eagle take.

The USFWS proposes to require general permittees to provide compensatory mitigation to offset incidental eagle takes at a fixed rate defined by Eagle Management Unit (EMU), a geographic region within which the USFWS manages eagle populations. Wind-energy projects operating under a general permit must obtain eagle credits to the nearest tenth of an eagle for every cubic-kilometer of hazardous volume of the project from a USFWS-approved conservation bank or in-lieu fee program, at the following rates:

General permit holders would be required to retain records to document compliance with the compensatory mitigation requirements and submit these compliance records to the USFWS upon request or upon the submission of each annual project report.

The SPR Blog will continue to provide updates on the development and promulgation of the proposed USFWS general permit for incidental takes.