By Elizabeth Knauer and Ahlia Bethea 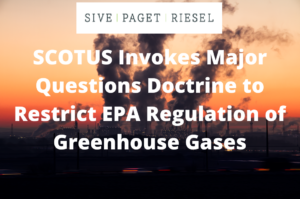 On June 30, 2022, the U.S. Supreme Court restricted the Environmental Protection Agency’s ability to regulate greenhouse gas (GHG) emissions in its 6-3 decision for West Virginia v. EPA. The majority for the Court held that EPA’s “generation shifting” objectives found in the Obama Administration’s Clean Power Plan fell outside the meaning of the “best system of emission reduction,” which Section 111 of the Clean Air Act authorizes EPA to impose on existing sources of emissions of certain air pollutants. The Supreme Court’s decision does not entirely foreclose EPA’s ability to regulate GHGs, which was recognized in Massachusetts v. EPA. However, the decision does prohibit the implementation of any national, sector-wide policy requiring shifts in fuel type; instead, EPA may only regulate the “inside the fence” GHG emissions of individual fossil fuel power plants. The decision also raises the possibility of other agency regulations being nullified by courts as overstepping the limits of executive authority.

The majority decision in West Virginia v. EPA is rooted in the “major questions doctrine,” which requires federal agencies to be able to indicate “clear congressional authorization” for their actions. While the Supreme Court has not explicitly articulated the scope of the major questions doctrine, the doctrine typically applies when an agency’s interpretation of its statutory authorize implicates an issue of great economic and political significance. Beyond West Virginia v. EPA, the Supreme Court had most recently invoked the major questions doctrine when addressing actions by federal agencies during the COVID-19 pandemic which the Court held to exceed the agencies’ statutory authority. For example, in National Federation of Independent Business v. OSHA, the Court prohibited the Occupational Safety and Health Administration’s (OSHA) imposition of a vaccine mandate for employers with more than 100 employees.

Traditionally, the major questions doctrine has been treated as an exception to the doctrine of Chevron deference, which courts use when a statute implies, rather than explicitly authorizes, an administrative action. Where an administrative agency’s organic statute is ambiguous, courts generally defer to the expert agency’s reasonable interpretation of its statute through Chevron deference.

The crux of the issue in West Virginia v. EPA was EPA’s authority to establish a “best system of emissions reduction” via the Clean Power Plan that depended on shifting from coal to lower-emission natural gas and renewable energy sources. Citing a need for historic action to address the climate crisis, EPA had promulgated an innovative approach to GHG emissions regulation through the Clean Power Plan’s “best system of emissions reduction” consisting of three “Building Blocks”:

It was undisputed that Building Block 1 would have a limited and marginal ability to further reduce GHG emissions at individual coal-fired power plants, hence EPA’s inclusion of the “generation shifting” Building Blocks 2 & 3. But the Supreme Court found that mandating a generation shift though Building Blocks 2 & 3 exceeded EPA’s statutory authority under the Clean Air Act and was too dissimilar from its traditional “technology-based standards” regulating emissions from individual power plants. While the Court found the language of Section 111 of the Clean Air Act had a plausible interpretation consistent with EPA’s position, it instead held that an agency’s expansive interpretation of its own statutory authority is not permissible where a “major question” is at stake. The Supreme Court held that the statutory text of the Clean Air Act did not demonstrate Congress’ clear intent to delegate to EPA the authority to make such a significant decision affecting the fate of the entire fossil fuel power plant sector. To the contrary, the fact that expansive climate change legislation had repeatedly failed in Congress appeared to be a significant factor in the Court’s majority decision that the legislature had not delegated this sweeping authority to EPA.

Congress is often broad in its delegation of agency authority when developing legislative text. It is impossible for the legislature to predict every potential future circumstance warranting agency action, and explicitly enumerating a list of authorized actions can effectively constrain the agency. Justice Kagan wrote in the dissenting minority opinion, “Congress makes broad delegations in part so that agencies can adapt their rules and polices to the demands of changing circumstances.”

The Supreme Court’s decision in West Virginia v. EPA appears to allow for expansive agency interpretation of broad legislative mandates in some cases but in not others. What constitutes a “major question” that must be decided by Congress will undoubtedly become a focus for challenges to many regulatory schemes in the future.