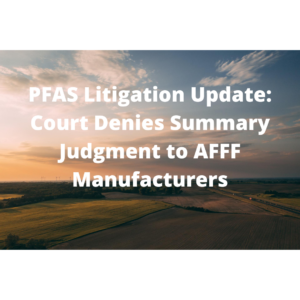 On September 16, 2022, Judge Richard M. Gergel of the U.S. District Court of South Carolina denied aqueous film forming foams (AFFF) manufacturers’ motion for summary judgment based on the government contractor indemnity defense in a multi-district litigation (MDL) currently pending against 3M Company, Tyco Fire Products LP, Chemguard Inc., National Foam, Inc., Buckeye Fire Equipment Company, and Kidde-Fenwal, Inc. and related entities, as well as a host of other defendants involved in AFFF production, distribution, and use. The court identified material issues of fact concerning whether the manufacturers timely informed federal agencies of the health and environmental risks of chemicals used in AFFF. A key focus of the decision was what if any actions the military and other AFFF users could have taken earlier to limit releases of foam into the environment had such information been disclosed by manufacturers.

This litigation, involving thousands of lawsuits from across the country filed by states, water providers, and individuals, concerns the release of perfluoroalkyl substances (PFAS), most prominently PFOA (perfluorooctanoic acid) and PFOS (perfluorooctane sulfonic acid), into the environment. AFFF products are widely used in firefighting and in particular at military bases and airports. Plaintiffs allege that the AFFF at issue contain and/or break down to PFOA or PFOS, are harmful to health and the environment, and are defective products. An earlier post discusses this litigation and other recent developments in the regulation of PFAS, including the proposed designation of these “forever chemicals” as hazardous substances under CERCLA.

In the 1950s and 1960s the United Stated Navy, led by the Naval Research Laboratory, sought to develop a new type of firefighting foam for shipboard fires, and promulgated a military specification or “MilSpec” in 1969 specifying requirements for AFFF. While the MilSpec has since been amended multiple times, it required contractors to use “fluorocarbon surfactants” in their AFFF. The requirement was not removed until 2019, when it was also amended to limit PFOA and PFOS concentrations to 800 parts per billion (ppb). Fluorocarbons surfactants are compounds containing fluorine and carbon atoms and that act to decrease surface tension, qualities that allow for easier foaming, thereby increasing the efficacy of AFFF.

Defendant manufacturers brought a motion for summary judgment on the government contractor immunity defense, which the U.S. Supreme Court articulated in Boyle v. United Technologies Corp., 487 U.S. 500 (1988). The defense derives from the federal government’s sovereign immunity from liability under state law and applies to government contractors whose products, manufactured for government use, are alleged to be defective. The three-part Boyle test sets forth the factors to determine when the defense applies, i.e., when state law liability for design defects in military equipment cannot be imposed, namely when “(1) the United States approved reasonably precise specifications; (2) the equipment conformed to those specifications; and (3) the supplier warned the United States about the dangers in the use of the equipment that were known to the supplier but not to the United States.” Under the “continued use” doctrine, Boyle’s first prong can be satisfied when the government continued using a product with full knowledge of its defects and risks, as long as the contractor warned the government of defects and risks known to it but not the government, as required by the third prong.

In denying defendants’ summary judgment motion, the court first found as a matter of law that the AFFF MilSpec was “not a reasonably precise specification” under the first prong of Boyle. Notably, while PFOA and PFOS are both fluorocarbon surfactants, the MilSpec did not specify particular types or subclasses of fluorocarbon surfactants—of which there were over one hundred known at the time of the original MilSpec, and which are not limited to compounds with eight-carbon backbones (as PFOA and PFOS have). The court noted that a compound that was listed in 1982 on the Department of Defense’s Qualified Product Listing, and therefore meeting the MilSpec requirements, relied on a fluorocarbon surfactant with a six-carbon backbone. This demonstrated that PFOS, PFOA, and other eight-carbon fluorosurfactants (considered to be more toxic than those with shorter carbon chains) were not necessary, primary ingredients specified by the AFFF MilSpec.

Next, the court denied defendants’ summary judgment motions based on the “continued use” doctrine. For defendant 3M, which manufactured the first AFFF and used PFOS as an ingredient, the court determined that the record reflected the company’s failure to disclose “highly material” information regarding the defects and risks of its product until at least 2000, when 3M provided many documents to EPA as part of a settlement of a potential enforcement action pursuant to the Toxic Substances Control Act. Among other evidence, the court cited internal reports from the 1970s among 3M scientists identifying PFOS as the possible source of widespread presence in human blood samples of fluorine compounds that was found in an independent study. The court also focused on evidence that 3M promoted its AFFF as biodegradable and not presenting a substantial risk of injury to health or the environment, while internal communications included opinions that PFOS was “insidiously toxic,” “VERY persistent,” and had a “safe” level in the blood at 1.05 ppb—lower than the 30 ppb concentrations found in the general population at the time.

3M’s ultimate disclosure of information concerning risks related to PFOS triggered an investigation by EPA beginning around 2000 on the effects of PFOS and PFOA. Growing knowledge of such risks ultimately led to determinations by the U.S. military to phase out purchasing of PFOS-containing AFFF and to restrict (but not discontinue) the use of other AFFF. 3M argued that the military’s continued use of its AFFF even after full disclosure of all information it had about the risks of the compound met the “continued use” standard. The court held that the record contained material factual disputes regarding the cause-and-effect relationship between 3M’s delay in disclosure and the government’s phase out of 3M’s AFFF, in that earlier disclosure may have resulted in earlier use limitations. The court therefore denied 3M’s motion.

Defendants Tyco, Chemguard, National Foam, Buckeye, and Kidde (collectively, the “Telomer Manufacturers”) grew their market share of AFFF when 3M withdrew its AFFF in 2000. The Telomer Manufacturers’ products were manufactured using a process that produced a mixture of fluorosurfactants with even-numbered carbons in their backbone. The Telomer Manufacturers and their industry lobbying group attempted to distinguish their products from 3M’s by highlighting that “telomer based AFFF does not contain PFOS and cannot be oxidized or metabolized into PFOS” and “does not contain any PFOA-based product.” Some represented that the telomer-based products were made of only six-carbon surfactants, and were not a likely source of PFOA in the environment. The court held that these representations failed to warn, and failed to acknowledge that chemicals used in the telomer-based AFFFs degrade to PFOA in the environment, and the court found that the Telomer Manufacturers had internal knowledge of these facts. Like 3M, the Telomer Manufacturers argued that the government has continued to use their products and, unlike 3M, that the government’s knowledge exceeded their own with regard to the possible risk to human health and the environment. The court pointed to a number of factual disputes relevant to the issue of government contractor immunity, including whether the government had superior knowledge and whether the government’s use of telomer-based AFFF has really been “continuous,” where in recent years telomer AFFF has been limited to mission critical activities. The court specifically focused on a statement by the president of the Fire Fighting Foam Coalition, an industry group, that he had reported to the EPA that telomer AFFF was not likely a source of PFOA in the environment, when in fact telomer-based AFFF could degrade to PFOA over time. The court thus also denied the Telomer Manufacturers’ motion leaving a final disposition of the defense to determination at trial.

Should they decide to pursue the defense in light of the court’s ruling, the manufacturers will have such an opportunity in the first trial in the MDL, which will concern the claims of the City of Stuart, Florida, a water provider whose supply was allegedly contaminated by AFFF-derived PFAS. That trial is scheduled to begin in June 2023.