By Alexis Saba and Adam Stolorow 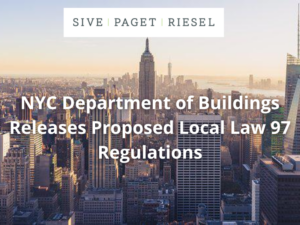 On October 6, 2022, the New York City Department of Buildings (DOB) issued proposed regulations to implement Local Law 97 of 2019 (LL97).  LL97 requires most large buildings in NYC to meet increasingly stringent greenhouse gas (GHG) emissions limits starting in 2024. The proposed regulations include three key components and numerous other clarifications to the law, including the establishment of GHG coefficients for the 2030-2034 compliance period. DOB is accepting public comments on the new regulations through November 14.

Finally, the proposed DOB rule clarifies the scope of allowable deductions from building emissions. Most notably, the proposed rule significantly limits the application of renewable energy credits (RECs) by allowing building owners to use RECs to offset only utility-supplied electricity, not on-site fuel consumption. This restriction will likely impact residential buildings most, as they tend to consume more fuel and less electricity than do commercial buildings. The proposed DOB rule also provides detail on the deduction for clean distributed energy resources, which include electricity generation and storage systems. In particular, for solar energy systems located on the building premises and that export electricity to the grid, the amount of exported electricity can be deducted from the total utility electricity consumed by the covered building in the reporting year.

The proposed DOB rule also includes details on other topics of interest to the regulated community and other stakeholders, such as the treatment of electrical use associated with electric vehicle charging, the reporting requirements for mid-year changes in building status (such as new construction, demolition, and ownership changes), and the expiration of emissions limit adjustments. Notably, the proposed DOB regulations do not clarify the emissions limit enforcement process, including how the City will apply penalty mitigation factors and adjudicate building owners’ challenges to penalty assessments.

DOB will hold a virtual public hearing on the proposed rules on November 14 at 11:00 am and will close the on-going public comment period that day. SPR will continue to track this developing area of law, with updates available on our Blog and LinkedIn page.