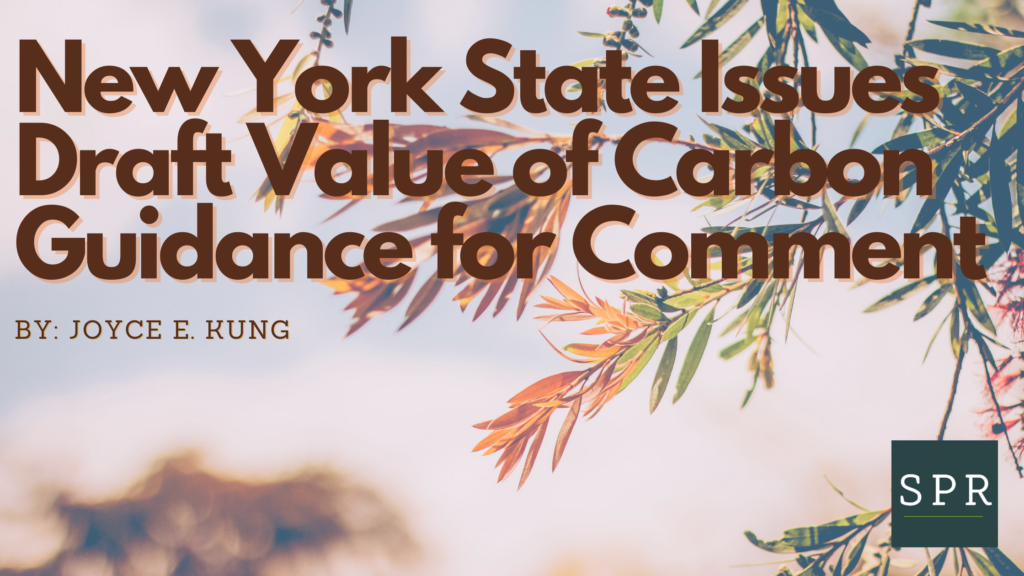 New York State’s Climate Leadership and Community Protection Act of 2019 (CLCPA) sets requirements and goals for statewide greenhouse gas emissions reductions, plans to achieve net zero emissions across the State’s economy, and renewables targets. In accordance with the CLCPA, the New York State Department of Conservation (NYSDEC), in consultation with the New York State Energy Research and Development Authority (NYSERDA), is charged with establishing a value of carbon for use by State agencies. NYSDEC released its proposed guidance document on October 28, 2020.

The guidance is intended to provide a monetary value of greenhouse gas emissions as a policymaking tool for State entities—and not to set a price, fee, or penalty on emissions. The value is expressed in terms of dollars per ton of specific greenhouse gases, and considers the costs associated with emissions and benefits of avoided emissions. NYSDEC, as required by the CLCPA, reviewed various approaches for establishing values, specifically: (1) a damages-based value of carbon (commonly referred to as the social cost of carbon) and (2) a marginal abatement cost (MAC) methodology.  The damages-based method is a measure of the monetary cost of damages from an incremental increase in emissions, while MAC is a measure of the cost to abate the last metric ton of emissions in meeting a particular target.

NYSERDA’s simultaneously-issued supporting memo provides a robust discussion of each methodology type, including examples of application in various countries, as well as a comparison between the damages-based and MAC valuations. Acknowledging the need for guidance that is readily applicably for State entities, NYSDEC chose to use the damages-based method in its guidance. The damages approach is already used by the federal government for assessment of environmental impacts, and unlike the MAC approach which is sector-based, the damages approach provides values that are more widely applicable without further or additional analysis. Actions best suited for this methodology include cost-benefit analyses in alternatives evaluations in rulemakings and environmental assessments; descriptions of societal benefits of emissions-related strategic plans, programs, and policies; and evaluations of decisions, including procurements, grants, and permitting. However, use of alternative methods is still encouraged as needed for the State to achieve the mandates of the CLCPA and other State goals, and NYSDEC may issue additional guidance on other methods in the future.

This draft guidance highlights the importance of estimating emissions for all relevant greenhouse gases, including carbon dioxide, methane, nitrous oxide (which have federal Interagency Working Group values), along with hydrofluorocarbons, perfluorocarbons, and sulfur hexafluoride (which will require reliance on peer-reviewed scientific literature); recommends use of values that consider the global impacts of climate change not only to comply with the CLCPA mandates but also as most reflective of the true nature of climate change and the economy; encourages regular updates to values; and underscores the application of a discount rate ranging from 1 to 3 percent, or in the alternative, with a central value of 2 or 2.5 percent. These percentages are chosen based on and in line with multiple lines of research. Choosing a higher discount rate mathematically results in a lower value of carbon—for example, after Presidential Executive Order 13783 in 2017, federal agencies have estimated U.S.-based (as opposed to global) damages at discount rates of 3 to 7 percent. The NYSERDA supporting memo calls out the resulting estimate to be $1 per metric ton of carbon dioxide, which the memo suggests is a gross underestimate of the potential damages from climate change. NYSDEC’s guidance estimates a 2020 value of carbon dioxide at $53-421 per ton; a 2020 value of methane of $1,527-6,578 per ton; and a value of nitrous oxide of $19,084-140,766 per ton.

NYSDEC is accepting comments on its draft guidance until November 27, 2020.