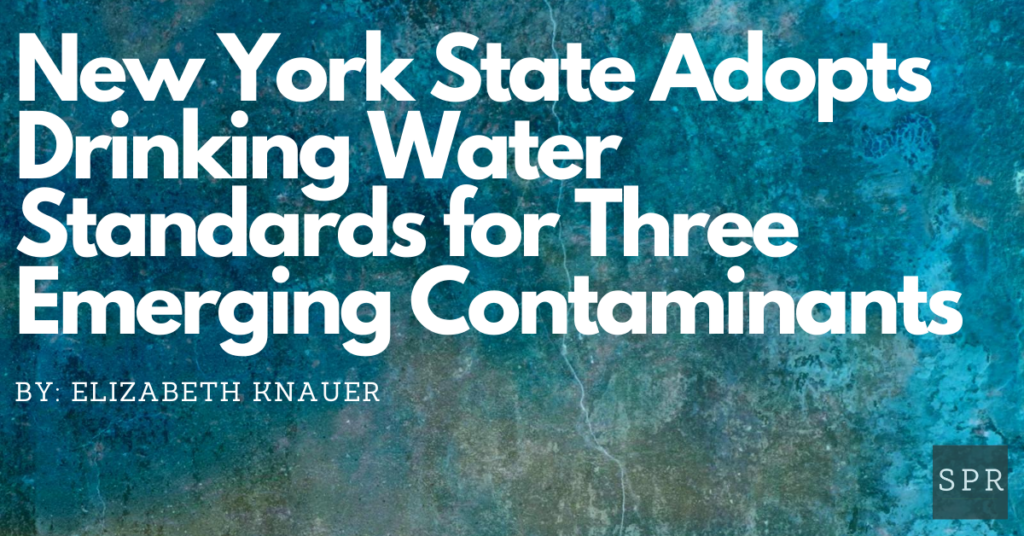 New York State has considered the imposition of Maximum Contaminant Levels (“MCLs”) for the emerging contaminants 1,4-dioxane, perfluorooctanoic acid (“PFOA”) and perfluorooctanoic sulfonate (“PFOS”) for almost three years, since September 2017 when the Governor announced the creation of a Drinking Water Quality Council to make recommendations.  Following the publication of proposed rules and a later proposed modification to give water providers a grace period to come into compliance, Governor Cuomo announced on Thursday, July 24th, that the Department of Health’s Public Health and Planning Council had adopted the new MCLs of 1 part per billion (“ppb”) for 1,4-dioxane and 10 parts per trillion (“ppt”) for PFOA and PFOS.  The MCLs will become effective after approval of the Commissioner of Health and publication in the State Register.

None of these chemicals has a federal MCL under the Safe Drinking Water Act.  New York is the first state in the United States to promulgate an MCL for 1,4-dioxane, a chemical that has been used as a stabilizer for certain solvents as well as widely used in home and personal care products.  PFOA and PFOS, which have been detected widely in environmental media and human blood, were also used in a large variety of applications including fire-fighting foam, waterproofing, and stain repellants.  In 2016, the U.S. Environmental Protection Agency established a Health Advisory level of 70 ppt for these chemicals, and the agency continues to study the risks associated with these compounds and other perfluoroalkyl substances (“PFAS”).  A number of states have adopted lower guidelines, and New York will become the fourth to impose MCLs, following New Hampshire, New Jersey and Michigan, which finalized its own rulemaking in July.  Other State-imposed levels are generally slightly higher than 10 ppt, with the exception of Michigan’s MCL of 8 ppt for PFOS.  New Hampshire, New Jersey and Michigan also have MCLs for other PFAS.

Once effective, the New York regulations will require that water providers begin testing for these chemicals within certain timeframes, depending on the number of customers they serve.  If testing reveals an exceedance of an MCL for one or more of these contaminants, a provider may request deferral of enforcement for up to 24 months after the effective date of the rule, to provide time for corrective action to take place.  The rules identify Granular Activated Carbon as the preferred treatment method for PFOA and PFOS, and oxidation for 1,4-dioxane.