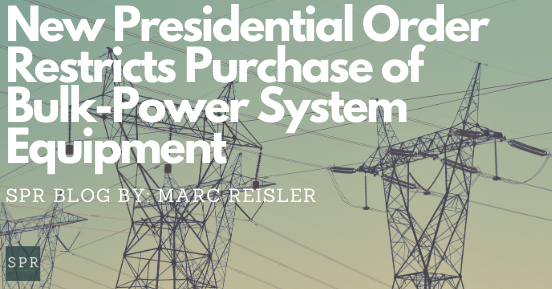 On May 1st, President Trump issued an Executive Order on Securing the US Bulk-Power System.  The Executive Order prohibits certain transactions involving bulk-power system electric equipment and may have important consequences for renewable energy developers.  It also establishes a task force to address national security issues in energy-related procurement by federal agencies and in the establishment of federal energy policy.

The Executive Order prohibits any acquisition, importation, transfer, or installation (each, a “Transaction”) involving bulk-power electric equipment which the Secretary of Energy (the “Secretary”) determines (in consultation with various federal agencies) involves equipment designed, developed, manufactured, or supplied by persons owned by, controlled by, or subject to the jurisdiction or direction of a “foreign adversary” if the Transaction either:

The Executive Order is designed to restrict implementation in the US bulk-power system of equipment connected to foreign governments or foreign non-government actors routinely engaged in conduct “significantly adverse to the national security of the United States or its allies or the security and safety of United States persons.”  “Bulk-power system” is defined as “(i) facilities and control systems necessary for operating an interconnected electric energy transmission network (or any portion thereof); and (ii) electric energy from generation facilities needed to maintain transmission reliability.”  The definition includes transmission lines rated at 69,000 volts (69 kV) or more, but does not include facilities used in local electricity distribution.

The Executive Order applies to Transactions involving a wide range of equipment used in bulk-power system substations, control rooms, or power generating stations, some of which may be incorporated in utility scale renewables projects.

The Executive Order applies to US persons and US governmental organizations as well as any property subject to US jurisdiction.  US persons include any entity organized under the laws of any US state or any person in the US.  Although the Executive Order is generally regarded to be directed principally at the operation of the electric transmission system, it appears sufficiently broad to incorporate some activities of utility-scale renewable energy developers, including developers of offshore wind and solar projects.

The Executive Order authorizes the Secretary, in consultation with various other federal agencies, to establish criteria for, and publish a list of, pre-qualified vendors and equipment, although the Secretary may also prohibit individual Transactions involving pre-qualified vendors or equipment.  The Secretary is also authorized to identify offending equipment and to design or “negotiate” means to mitigate the security threats posed to the US bulk-power system by such equipment.

The Secretary is required to identify currently implemented prohibited equipment, and develop recommendations on ways to identify, isolate, monitor, or replace such items as soon as practicable, taking into consideration the overall risk to the US bulk-power system.

The Executive Order establishes a Task Force on Federal Energy Infrastructure Procurement Policies Related to National Security (the “Task Force”).  The Task Force is comprised of the Secretary, other cabinet members, and other senior administration officials as determined by the Secretary.  The Task Force will implement a consistent set of energy infrastructure procurement policies and procedures for agencies to ensure that national security considerations are fully integrated across the federal government, and determine methods and criteria for incorporating national security concerns into federal energy and cybersecurity policymaking.

The Executive Order does not identify specific “foreign adversaries;” however, the 2019 Worldwide Threat Assessment issued by the Director of National Intelligence reported that China, Russia and others were spying on US infrastructure with cyber techniques.  Last year, a similar Executive Order addressed to telecommunications equipment was widely reported to be directed at the Chinese company Huawei, which also makes some electric power equipment.

Within 150 days, the Secretary, in consultation with other applicable federal agencies, will promulgate rules and regulations to implement the Executive Order.  Further clarity may come at that time, although the Executive Order is in effect and applies to transactions being initiated now, so companies must take it into account in ongoing procurement activities.  We will continue to monitor developments as further guidance is published.