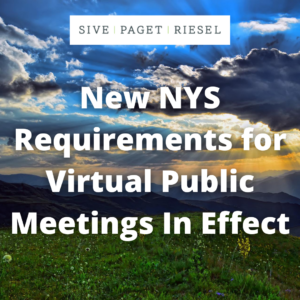 On June 8, 2022, the virtual public meeting requirements adopted in the 2022 New York State budget came into full effect after the expiration of a 60-day transition period from the temporary provisions adopted during the Covid-19 pandemic. Codified in the New York Public Officers Law (POL) § 103-a, the new requirements allow local public bodies to use videoconferencing to conduct their meetings when certain conditions are met, as described below.

A “local public body” is fully defined in the POL, but in summary, the term encompasses public corporations such as a municipality and political subdivisions such as a school district, as well as any committee of such bodies. The term also encompasses any entity for which a quorum is required to conduct public business, that consists of at least two members, and that performs a governmental function encompassing less than the entire state.

The following requirements must be met for local public bodies to hold virtual public meetings:

Local governments should familiarize themselves with these requirements, including the provisions mandating adoption of a local law authorizing the use of videoconferencing and public posting of written procedures governing attendance. If implemented lawfully, videoconferencing can be a helpful tool for facilitating public engagement with local decision-making.