By Alexis Saba and Kevin Rogers 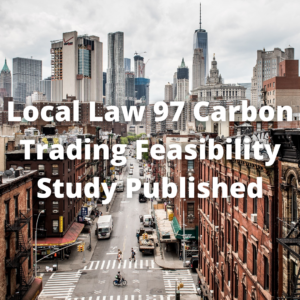 The carbon trading feasibility study required by NYC Local Law 97 of 2019 (Local Law 97) has been published by NYU’s Guarini Center on Environmental, Energy & Land Use Law, in consultation with the New York City Mayor’s Office of Climate & Sustainability, among others. Local Law 97 requires that most buildings in NYC over 25,000 square feet meet greenhouse gas (GHG) limits that go into effect in 2024 and become increasingly stringent through 2050. The purpose of the study was to evaluate the feasibility of developing a carbon emissions trading program as an alternative compliance pathway for meeting the Local Law 97 emissions limits. The research team analyzed two model trading programs (detailed below) and concluded that either program would achieve the City’s twin goals of reducing GHG emissions from buildings and stimulating investment in environmental justice communities (EJCs). Local Law 97 does not set a deadline for the City to decide on implementation of such a program, but if the City moves forward, the trading program would be the first in the world of this scale with the combined objective of advancing environmental justice priorities.

The study analyzes two model trading programs, primarily distinguished by the method of initial allocation of credits. In the first proposal, buildings covered by Local Law 97 and located outside of EJCs would receive free credits up to 70% of their Local Law 97 emissions caps, and the City would conduct an auction to sell credits equivalent to the remaining 30%. For example, if a covered building outside of an EJC has a 2024 emissions limit of 2,500 tons of carbon dioxide equivalent (tCO2e), it would be able to emit 1,750 tCO2e for free and would have to either purchase credits at auction constituting 750 tCO2e or, as described in Local Law 97, purchase renewable energy credits or carbon offsets to meet the emissions cap. Such building could also install energy efficiency retrofits to avoid emitting the 750 tCO2e. Buildings located within EJCs would receive free credits equal to 100% of their Local Law 97 emissions caps. Notably, the City would have to obtain State legislative authorization to hold the auctions.

In the second proposal, the City would not auction credits. Rather, covered buildings could freely emit up to their Local Law 97 limits or, if they emit less than their limits, receive free credits for the difference between what they emitted and their caps. In effect, the initial emissions credits would be automatically generated by covered buildings under their emissions caps and available for trading on a free market, with no price floor. Both proposals allow banking of credits, but such banked credits would reduce in value by 20% each year.

As for environmental justice considerations, both proposals also include mechanisms for avoiding increases in local air pollutants in EJCs. In the auction model, 20% of the auction proceeds would be allocated to retrofitting buildings in EJCs. In the free allocation model (without an auction), the City would, if approved by City Council, accelerate the phase-out of fuel oil #4 by 2025 instead of 2030, as currently required by law. This would reduce local air pollution from particulate matter and other harmful pollutants. Both proposals would allow New York City Housing Authority (NYCHA) and affordable housing buildings (currently exempt from the carbon emissions caps) to sell credits into the market. This feature is intended to incentivize deeper emissions cuts from residential buildings in EJCs.

The study determined that both trading models would accelerate local GHG reductions, avoid more premature deaths due to air pollution, lower the cost of pollution abatement, and generate more investment in the local economy than would occur if there were no trading mechanism under Local Law 97. Both cost savings and pollution reduction benefits would flow to EJCs and non-EJCs, but the magnitude and distribution of benefits would differ between the proposals. Under the auction allocation model, the EJCs would gain a significantly larger portion of the net benefits of credit trading, partially due to the designation of auction proceeds for building retrofits in those communities. The auction model would also set a price floor of $50 per credit, which the study found would reduce investor and decision-making uncertainty, drive early action, and achieve greater overall GHG reductions than if the price were set on the open market. However, the auction model would likely increase compliance costs for buildings outside of EJCs by effectively lowering the emissions cap by 30% compared to the emissions limit set by Local Law 97, thereby making buildings either pay for credits or reduce their emissions. The auction model would also impose administrative costs and burdens on the City, which would have to establish and run the auctions. In sum, the study concludes that adding a GHG emissions trading program to Local Law 97 could produce numerous additional benefits for the City beyond those that Local Law 97 is projected to generate by itself.