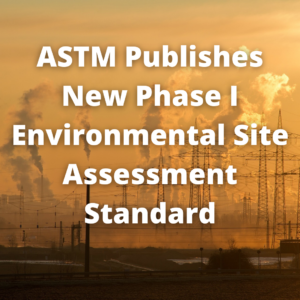 In November 2021, ASTM International published the new Phase I environmental site assessment standard, denominated E1527-21, to replace to prior E1527-13 standard that has been in use for the past eight years. The new standard provides clarity and guidance on the best practices for preparing Phase I reports, which identify environmental conditions on properties with respect to hazardous substances and petroleum products, as well as business risks such as lead-based paint.

ASTM states that the goal of the new standard is to provide clearer, stronger guidance that allows for more consistent use and application. At a high level, the E1527-21 standard clarifies the definitions for a recognized environmental condition (REC), historical REC, and controlled REC; updates the historical research and site reconnaissance standards; revises some of the Phase I report requirements and structure; includes recognition of emerging contaminants like per- and polyfluoroalkyl substances (PFAS) as business environmental risks; and adds to and updates the appendices. The most material changes are described in detail below.

The key function of the ASTM standard is to identify RECs. The new standard clarifies but does not substantively revise the three circumstances constituting a REC, except for the addition of “likely release” to the second REC condition:

“(2) the likely presence of hazardous substances or petroleum products in, on, or at the subject property due to a release or likely release to the environment.”

As the qualifier of “likely” was difficult to apply even in the prior standard, the new standard also provides a definition that will help practitioners analyze site conditions and identify RECs:

“likely is that which is neither certain nor proved, but can be expected or believed by a reasonable observer based on the logic and/or experience of the environmental professional, and/or available evidence, as stated in the report to support the opinions given therein.”

The E1527-21 standard also clarifies the traditionally tricky distinction between historical and controlled RECs. It confirms that historical and controlled RECs must be “affecting the subject property” (i.e., not limited to an adjoining or surrounding property) and explains how to classify a REC as historical or controlled so that practitioners can correctly and consistently make these determinations. A new appendix teases apart the REC definition, includes a flow chart, and analyzes sample scenarios to provide further clarification and guidance.

The revisions serve as a reminder that although Phase I reports are a familiar component of real estate and corporate transactions, the underlying investigations and analyses require expert judgment and have legal significance. A Phase I report that meets the “all appropriate inquiry” requirement will allow reliance parties to assert defenses to liability under CERCLA. ASTM has formally requested that the U.S. Environmental Protection Agency (EPA) revise its regulations to provide that Phase I reports prepared under the new E1527-21 standard will allow report users to meet the “all appropriate inquiry” requirement. The EPA rulemaking process is expected to take approximately one year.

Preparers and users of Phase I reports are already questioning whether to use the prior or new standard. The prior E1527-13 standard will satisfy the “all appropriate inquiry” requirement at least until EPA incorporates the new standard in the regulations; however, the new E1527-21 standard is now the best practice. Therefore, the approach that is likely most protective of the Phase I report user is to comply with the new E1527-21 standard, which encompasses and is more robust than the prior standard, and to state that that the Phase I meets the E1527-13 standard and “all appropriate inquiry” requirement.